Who is City of Derry Crystal?

We are one of the few companies left in Ireland, who still hand cut crystal. Offering a number of different and bespoke designs, you truly can have a completely unique product. 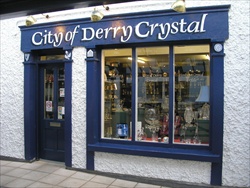 City of Derry Crystal is situated in the beautiful Derry City Craft Village, which you can take a virtual tour of.  It's well worth a visit, particularly in the summer months, when there are informal music sessions in the square.  There are many other talented crafts people trading in The Village too.

Prior to buying City of Derry Crystal, I ran a business which produced plastic stationery products by high frequency welding.  We made ring binders, cheque book covers and similar products.  A part of the business also engraved windows, in particular for Hotels and Public Houses - and that's how I got into the business of glass engraving.

We consider we are the best and most unique glass engravers in Ireland.  This statement is borne out of the services we offer, which, in conjunction with one-another, makes for unique products.  Combined with our stringent Quality Control Systems, we genuinely feel makes us 'the best'. 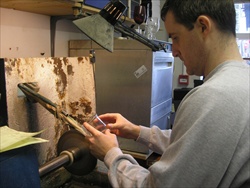 What are we known for?

We are one of the few companies left in Ireland, who still hand cut crystal.
Offering a number of different and bespoke designs,
you truly can have a completely unique product.

Are you looking for a set of beautiful hand cut crystal glasses to give as a gift?

What better way to personalise a bespoke glass or crystal gift than engraving?

If you are a commercial company looking for a wide range of products to be engraved, look no further.

As well as engraving gifts,
City of Derry Crystal are able to engrave trophies, medals and award plaques.

Show your loved one how much you care on your wedding or anniversary.